I had the great pleasure and honor of meeting Alexander Edwards at the Frankie Manning Centennial in New York City in May earlier this year. Al, as he likes to be called, was one of the first black Marines to serve in World War II. The service and sacrifice of the Montford Point Marines (Montford Point was the segregated location where they trained) was belatedly recognized in 2012, nearly 60 years later, by the Congress presenting surviving Montford Point Marines with the Congressional Gold Medal.

After the War Al went to work at the US Postal Service, first in Florida and then in New York City, where he became Frankie’s manager. He and Frankie remained close friends for the rest of Frankie’s life.

As a wonderfully unexpected post-Thanksgiving surprise, Al rang my studio doorbell yesterday out of the blue. I was delighted to welcome him and his lovely wife Janice into my studio. He very graciously agreed on the spot to be both interviewed and drawn! In this interview Al shares not only stories about him and Frankie, but also gives us a glimpse into the struggles of being black in America in the pre-civil rights era, in particular the institutionalized segregation and discrimination he experienced in both the United States Marine Corp and in the United States Postal Service. Thank you, Al, for your service, for sharing your stories and giving us an insight into the Frankie you knew. 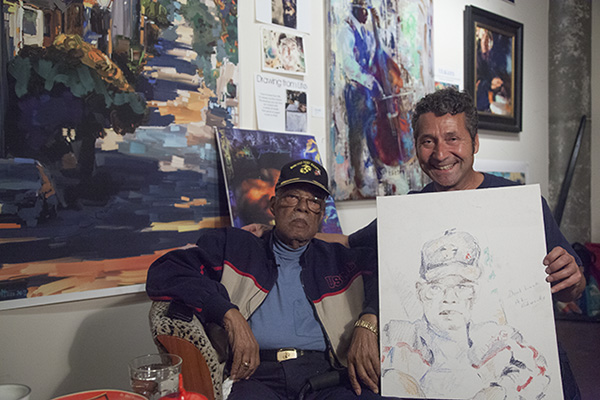 The pastel portrait of Al created during this conversation.

The portrait of Frankie referred to in this interview can be seen by clicking here. Other portraits in my series of Lindy Hop Legends include one of Frankie’s son, Chazz Young; one of Norma Miller, one of the only remaining members of the Whitey’s Lindy Hoppers; and one of Dawn Hampton.